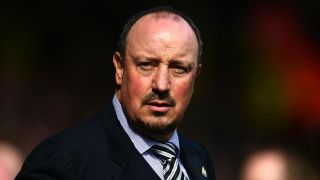 Rafael Benitez is hoping Newcastle United's recent improvement will continue on his return to Liverpool on Saturday.

Newcastle have taken four points from home games with Swansea City and Manchester City over the past week but remain in the relegation zone, two points adrift of 17th-placed Norwich City.

The Magpies have lost all eight Premier League encounters away from St James' Park in 2016 but Benitez is optimistic his players can arrest that slide at Anfield.

He said at Friday's news conference: "We have to believe, I'm very happy with the reaction of the team in the last two games. With that intensity, passion and character on the pitch, the players showed they believe and I hope everybody has the same feeling. We'll fight to the end.

"It's the way we have to act if we want to be stronger.

"As a team we have to work hard in attack and defence, Liverpool are scoring a lot of goals but we will go there to win. We are where we are but we have to carry on and stick together.

"Before the game you always have to think about getting three points. It doesn't matter about the name of the rival.

"Our record against Manchester City was quite negative but we fought with the belief we could get three points. Liverpool will be exactly the same."

Stand-in captain Jonjo Shelvey has been relegated to the bench for the past two games while fellow big-money signing Georginio Wijnaldum was also dropped for the game against City in midweek.

Benitez has been impressed at the way both have handled the situation.

"Competition between players is really important, especially at the end of the season when you have so many important games," he added.

"Players like Jonjo and Gini have been really good. They are working hard and they have to compete.

"They know my ideas and know they have to compete anyway."

Benitez spent six years on Merseyside between 2004 and 2010, with the highlight undoubtedly the club's 2005 Champions League success over AC Milan in Istanbul.

The Spaniard can see plenty of similarities between Newcastle and Liverpool and is relishing returning to Anfield for just the second time since leaving six years ago.

"There are a lot of similarities between the Geordies and Scousers, the atmosphere and the passion of the crowd, we're fighting and they're fighting - they have a good manager and good players so we're trying to replicate what we had here the other day [against Manchester City]," he said.

"The cities are similar, they're passionate. They're workers and I like this.

"I hope there is a good reception, my connection with the city is fantastic, my family lives there and we have a foundation helping people but we will try to get three points."