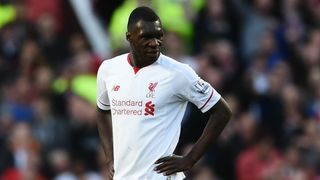 Christian Benteke is one of six first-team players to be left out of Liverpool's travelling party for the game against Bordeaux in the Europa League on Thursday.

Brendan Rodgers has rung the changes ahead of the opening group game against the Ligue 1 side, with Nathaniel Clyne, Dejan Lovren, Lucas Leiva, James Milner and Martin Skrtel all joining the striker in being left at home.

Benteke, a close-season signign from Aston Villa, scored a wondergoal against Manchester United at the weekend but will be rested for the tie in France.

First-choice central defensive pairing Skrtel and Lovren have played in all five Premier League games this season, as has right-back Clyne.

Milner has been another ever-present in the league, while Lucas has been enjoying a run in the team as a replacement for Jordan Henderson, who has been struggling with a heel injury.

Reports suggest the likes of Adam Lallana, Divock Origi, Mamadou Sakho and Kolo Toure are all in line to play as a result of the squad reshuffle.