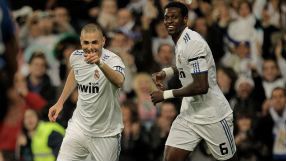 The in-form French striker netted in the 24th minute and doubled the lead with a superb solo effort just after the restart, making it eight goals in his last six matches.

"We are used to looking at Cristiano Ronaldo's statistics but Benzema has now scored 19 goals (in all competitions), which is an important quantity," Real director general Jorge Valdano told Spanish television.

"These numbers are proof of how good he is. He is going to give us a lot to be happy about in the future."

Third-placed Valencia's midweek exit from the Champions League appeared to have taken its toll as Unai Emery's side slumped to a 4-0 defeat at struggling Real Zaragoza.

Jiri Jarosik, Ander Herrera and two penalties from Gabi sank the visitors, who finished with 10 men, to leave them on 54 points, 16 short of Real.

Earlier, two goals from Sergio Aguero failed to earn Atletico Madrid a win at relegation-threatened Almeria, as the hosts twice fought back to level at 2-2.

Argentine Aguero scored from a Thiago pass just before the break and fired in a solo goal to restore their lead in the 61st minute after Albert Crusat had levelled for Almeria with a fierce volley.

Henok Goitom headed a deserved equaliser for the home side 13 minutes from time to leave Atletico seventh with 39 points.

The Hercules game had never promised to set the pulse racing, with both sides more concerned with battles to come - Real's in Europe and Hercules's to avoid relegation.

Real's quest to reach the Champions League quarter-finals for the first time in seven years requires them to build on a 1-1 first-leg draw against Lyon at the Bernabeu on Wednesday, and Mourinho's line-up reflected that.

Top scorer Ronaldo and defender Ricardo Carvalho had been left out of the squad, the former to recover from a muscle strain, while Pepe and Xabi Alonso started on the bench.

Hercules, La Liga's worst travellers with only six points and three goals scored on the road, were without injured top scorer David Trezeguet while his strike partner Nelson Valdez only came on midway through the second half.

It did not take Real long to breach the visitors' defence, Mesut Ozil sending Alvaro Arbeloa down the right, from where he pulled the ball back for Benzema to sweep home the opener.

Real striker Emmanuel Adebayor hit the bar before Benzema settled the match, dribbling into the area along the byeline before cutting inside to fire in off the far post in the 56th.

Hercules slipped to 19th in the standings with 26 points behind 18th-placed Almeria on goal difference.