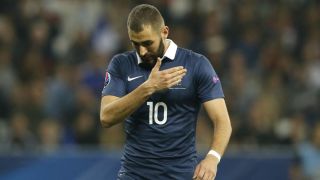 Karim Benzema should be included in France's European Championship squad this summer, according to former international team-mate David Trezeguet.

Benzema was suspended indefinitely from the national team in December after being charged with conspiracy to blackmail.

However, the Real Madrid attacker received support from the Euro 2000 and 1998 World Cup winner in his battle in the on-going sex-tape scandal with Mathieu Valbuena.

Whilst a decision cannot presently be made until the case is resolved, Trezeguet was clear in his outlook on the situation when asked whether the shunned striker should play in the upcoming international tournament.

"Yes. At team level, for the show. There is talk of a single player, (who is) exceptional, compared to the competition and its national team," he told RTBF.

"That is the sport side. After that, it is not for me to decide. But I hope, personally, they will find a solution and that Benzema will be included with France.

"We are all aware that this is a very important player for the team of France."

Benzema has denied any wrongdoing, whilst Valbuena was left out of the most recent France squad.