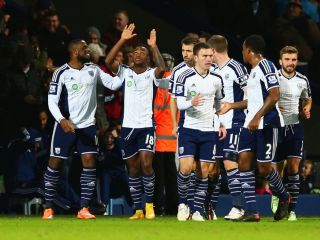 The 21-year-old forward also scored four times in a 7-0 FA Cup hammering of Gateshead a week earlier in Pulis' first match at the helm.

Liverpool and Tottenham are among the clubs reportedly interested in signing West Brom's leading scorer this month, but Pulis has stressed that he is eager to add to his squad rather than lose key players.

Berahino, who got his first England call-up in November, was giving nothing away over a potential move this month after scoring his sixth goal in his last three games to move Pulis' side up to 14th place.

He said: "I'm playing, I can't complain. I'm starting to score goals again, which I'm enjoying. That's as far as it goes.

"Obviously I've got big ambitions, but at the moment I'm a West Brom player and I'm enjoying my football.

"There are always rumours going around, but I can't control anything. The only thing I can control is what I do on the field."