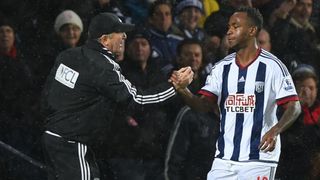 West Brom manager Tony Pulis says striker Saido Berahino will not start at Newcastle United this weekend despite being "desperate" to return to action.

Berahino was a target for Steve McClaren's men during the transfer window and West Brom turned down at least one offer from Newcastle for a player whose future at The Hawthorns has been in doubt over recent months.

The 22-year-old also courted interest from Tottenham in the previous transfer window but looks set to see out his contract at West Brom, which expires in June 2017.

While Berahino could feature against the club he nearly joined this week, Pulis says getting the striker back to full fitness is the main priority.

"He wants to play, desperately. He wants to be involved, we're desperate to get him involved," the Welshman told reporters.

"All the shenanigans have eased off the kid and hopefully he can see a path through to the end of the season.

"If there's a path that he can see through and focus his mind on then he's a different kid but if there's different obstacles he gets confused, he gets misled, everything else runs through his mind.

"Hopefully that path is clear now and he can see that he has to perform and help this football club who pay him good wages to stay in the Premier League."

Berahino has not started a Premier League game since October but his return to the starting line-up would bolster a side who have managed just 23 top-flight goals this term.

With one goal from their last three outings, Pulis is hopeful Berahino can improve their recent striking struggles.

"You have got to accept that this football club has been without one of the best goalscorers in the Premier League all season," he added.

"You take Jamie Vardy out of Leicester and see where they would have been. Saido has been a big miss for this football club.

"The window is closed now and he's still with us so we have to now make sure he gets his head down and works hard on his fitness and we have to get him back into the fold as quickly as possible."