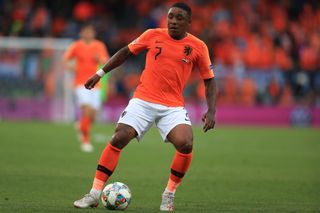 Steven Bergwijn has promised to deliver goals after landing his “dream” move to Tottenham.

The 22-year-old joined from PSV on Tuesday, where he hit 29 goals in 112 Eredivisie appearances having progressed through the ranks at the Eindhoven outfit.

With Harry Kane injured, Spurs head coach Jose Mourinho was keen to add further attacking options to his ranks. Bergwijn has signed a contract until 2025 and moves to the Tottenham Hotspur Stadium for a fee believed to be in the region of £25million.

“I think it is an amazing move, an amazing club,” Bergwijn said in an interview with the club’s official website.

“Whatever I can bring I will give to the club and the team, it is a dream for every football player to play in the Premier League.

“I live from day to day, I want to score goals, give assists and win the Champions League – last season I loved to see that you beat Ajax!

“When I was a young boy I looked up to the coach, of course Mourinho, and now I play for him.

“You have to believe in yourself and I know what I can bring to this club and this team – I am good with the ball and I can score.

“They play good football and that is what I like, to play here is a dream for me. It is an honour.”

Bergwijn has nine Holland caps and becomes Tottenham’s second permanent signing of the January window after the club converted Giovani Lo Celso’s loan move into a full-time deal on Monday.

In Kane’s absence, Tottenham continue to be linked with a late move to bring in another striker with Chelsea’s Olivier Giroud reportedly the latest target.