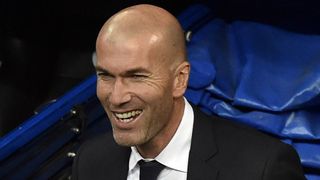 Madrid fans increasingly turned their frustrations on the team and Rafael Benitez towards the end of the Spaniard's unpopular tenure at the Santiago Bernabeu.

Zidane took charge of Real for the first time since replacing Benitez as coach on Saturday and looked on as Gareth Bale starred in a dominant win with a hat-trick.

The former France star was pleased to have the home crowd on his side following a turbulent time for the club.

"I liked the atmosphere very much and I think the supporters were behind the team since the beginning," he said.

"The most important thing for us now is to keep improving and just think this was the first match.

"Let’s see what will happen in the next one, but the idea is to try to play well as well as to win the matches. The supporters were amazing."