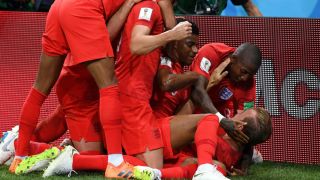 The Tottenham striker completed a brace with stoppage-time winner in Volgograd as Gareth Southgate's men got their World Cup campaign up and running with a breathless 2-1 victory.

Rashford added second-half impetus to the Three Lions attack as a second-half replacement for Raheem Sterling but was left to marvel at the man of the hour.

"He's been a brilliant leader for us leading up to the tournament, as well as now that we have started the tournament," Rashford told reporters at England's Repino base.

"He always leads by example and there's no better way to do it than by scoring goals, like he has been doing.

"He's a top forward. His career is only going to go up and up.

"He's very young and at this stage of his career, he's going to keep improving and getting better, so who knows how good he can get?"

Kane was also at the centre of another of the game's major talking points when he was twice grappled to the floor inside the Tunisia area, with referee Wilmar Roldan neglecting to point to the spot despite penalising Kyle Walker for a seemingly lesser offence earlier in the contest.

Get your pharmacy tips from forward Marcus Rashford. Claims his fly spray kept the Volgograd bugs at bay June 19, 2018

The video assistant referee system, making its debut at the World Cup, was perplexingly not brought into play to clear up the Kane incidents.

England's squad received a pre-tournament briefing on VAR from a FIFA delegation and, although Rashford maintains the technology is a positive for the game, he believes the need for improvement is clearly evident.

"The idea of bringing it into the game is spot on," Rashford added. "It will improve with time because there are some decisions – like the ones you said [involving Kane] - where they have to at least check whether or not it's a penalty.

"That's down to them to decide but at least they should check those. I'm sure it's something they can improve on."

"It's a tough one because I think it's something that the game definitely needed. As with everything it needs improving and I think it will improve in time."