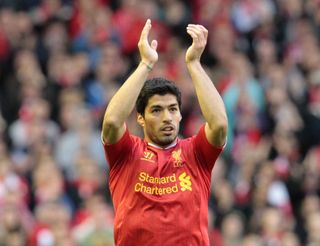 Liverpool sit third in the Premier League despite Saturday's 2-0 loss to leaders Arsenal, with Suarez's form helping to mark them out as strong contenders for a UEFA Champions League qualification spot.

Since returning from a lengthy ban, imposed following the striker's bite on Chelsea's Branislav Ivanovic in April, Suarez has scored six goals in five top-flight appearances.

But the Uruguay international believes that he and his team-mates are yet to hit top form.

"We're doing well right now but we need to carry on that form into the Christmas period," he told Match magazine.

"I think our best is yet to come, which hopefully means well for the end of the season and our chances of making next season's Champions League. That's one of our aims.

"It's good to be playing well and contributing with goals, but the most important thing is getting three points every week. I wouldn't be scoring without the help of my team-mates, so thanks to them."

After welcoming Fulham to Anfield on Saturday, Liverpool face a trip to Goodison Park to take on rivals Everton following the international break.