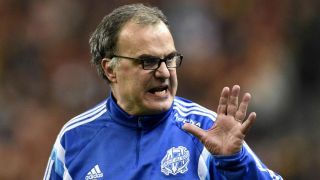 Lazio have confirmed Marcelo Bielsa has pulled out of a deal to coach the club next season.

The Serie A side announced on Wednesday that the Argentine had signed a contract to take over for the 2016-17 campaign and was due to start work on Saturday.

However, the former Athletic Bilbao and Chile boss, who quit his role at Marseille in August 2015, appears to have experienced an abrupt change of heart.

"We note with surprise the resignation of Mr Marcelo Bielsa... in clear violation of the commitments undertaken with the contracts signed last week and regularly deposited with the League and the FIGC with their required procedures," the club said in a statement.

"The company reserves all actions to protect its rights [and] entrusts the management of the team in the final preparatory retreat to Mr Simone Inzaghi."

Early speculation has suggested Gerardo Martino's decision to step down as Argentina coach may have prompted countryman Bielsa, who previously coached the national team from 1998 to 2004, to reconsider his next move.