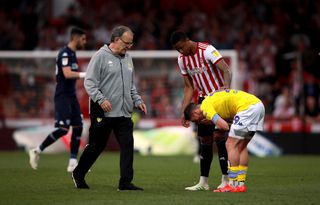 Neal Maupay gave Brentford the lead on the stroke of half-time when he curled a stunning 25-yard drive past Leeds keeper Kiko Casilla and Sergi Canos put the game beyond doubt just after the hour mark when he finished
off a slick four-man move.

Bielsa said: “I am very sad with today’s loss and it’s going to be very difficult but as long as maths say something we will follow this. But we know our opportunity is now less.”

The Argentinian shook every one of his players’ hands at the end of the pivotal game “because we all saw that our possibility to finish first and second were decreasing… and the players felt that too. I thought they deserved that for all the effort they made.”

He refused to be drawn on Patrick Bamford’s first-half penalty claim but conceded Leeds’ automatic promotion chances have faded because of their failure to take their chances:

He continued: “Today’s game was like many we have played this year. We didn’t take advantage of the positive moments where we could have made a difference.

“At the beginning of the first and second half we could have scored. The moments we dominated less they dominated us and scored. During the second half when we were dominating and we thought the draw was coming, they scored their second goal

“They have good offensive players but we need to look at why we have to have twice as many chances to score as our opponent. If we had normal efficiency we would have 10 or 12 points more than we have but that’s not the case so now we have to put all our energy in the options we still have.

“There is sadness linked to the fact that we could have changed small things but if we want to say ‘why we don’t have 10 points more’ you just have to take a look at how many chances to score we need compared to other teams to score against us.”

Brentford head coach Thomas Frank was delighted with his side’s discipline and overall performance against a side that likes to dominate possession like his.

He said: “It was a very good performance and well-deserved win capped off by two very high quality goals. We defended low and they didn’t create anything and that is a testament to our defensive mindset.

“I was pleased with the discipline and the way we kept our energy levels, but also our patience in situations and the big concentration we needed to see it through.”

He added: “Us and Leeds are the two sides with the most possession in the Championship so we knew we would have to be patient, defend well and pick our moments.

“Apart from 10 or 15 minutes at the start of each half when we gave the ball away too easily, I thought we did that well.

“We have quick, offensive players and we made life difficult for them by changing from high pressure to low pressure and think we could have scored one or two more.”

Frank added: “Sergi Canos was very good today but he might have got us a third.

“He just needed to square it for the move to be beautiful but I can understand why he tried to finish it. I’ll be speaking to him later.”