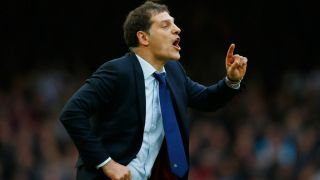 West Ham United boss Slaven Bilic says his side can justifiably set their sights on Europe after their 2-0 win over Liverpool on Saturday.

Headed goals in each half from Michail Antonio and Andy Carroll secured back-to-back victories for the London club and moved them two points ahead of Jurgen Klopp's side in the Premier League table.

West Ham were knocked out at the qualifying stage of the Europa League by Astra Giurgiu in August but Bilic is confident they can aim to return to continental competition given their form this season.

"It's a great win - I think we deserved it," he said afterwards.

"We defended well because you have to. We had many opportunities, scored a couple of great goals and kept a clean sheet.

"We are going to have our ups and downs but we are definitely a good team. We had a couple of dodgy results at home earlier in the season but since then we have been solid and not conceding many goals."

Asked about his European ambitions, he added: "It's definitely moving that way.

"We're disappointed how we played in the Europa League earlier in the season - but looking back maybe it was a good thing. We've got high ambitions."

Manuel Lanzini was forced off in the first half of Saturday's win and Bilic later confirmed he has suffered a groin problem.

"I hope he will only be out for a short time," the West Ham manager continued.