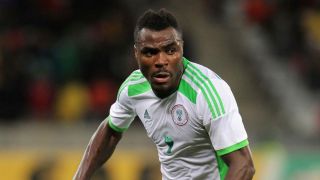 West Ham boss Slaven Bilic is excited to unleash Emmanuel Emenike on the Premier League after monitoring the Nigerian forward for some time.

Emenike completed a loan move from Fenerbahce until the end of the season on Sunday, with West Ham having the option to make the deal permanent should he impress.

Bilic has come up against the 28-year-old at former clubs Lokomotiv Moscow and Besiktas and is now looking forward to seeing him in action for the Hammers.

"Emenike has been on our radar [for a while]," he told Sky Sports News. "I have known him for a long time, he is a great player and I hope he's going to do a great job for us.

"He is a good goal scorer and works for the team, running in the channels. He's a really good player."

Bilic added: "We wanted him [Emenike] because [Mauro] Zarate left to Fiorentina and there is a possibility [Nikica] Jelavic will go.

"So with a couple of strikers still injured we just needed a player who can play in three positions up front."