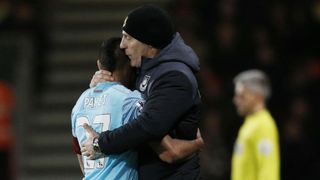 Slaven Bilic said Dimitri Payet "makes a difference" after the Frenchman scored one goal and set up another in West Ham's impressive 3-1 win at AFC Bournemouth.

The visitors fell behind to Harry Arter's 17th-minute goal but rallied to pick up all three points at the Vitality Stadium, in the process extending their unbeaten run in the Premier League to eight matches.

After drawing West Ham level after 68 minutes with a wonderful free-kick, Payet turned provider when his low cross from the right allowed Enner Valencia to volley home his first of the night.

Valencia then secured the points with a set-piece strike to match his team-mate's earlier effort, leaving Bilic purring at his side's second-half comeback.

"I am very pleased. The boys showed the character and we deserved to win. Even when we went behind we continued to play football," he said.

"We scored three great goals. Dimitri is that kind of player and top class. We waited for him to come back [from injury] and he makes a difference.

"Dimitri is an individual in the last third but with his presence he makes the other players better and that is why we got him.

"We changed the shape at half-time and told them to play with more bravery in the second half. It is a great away win.

"I said to the media we were picking up points when we were drawing. The guys showed great character. We now have the attacking players back."