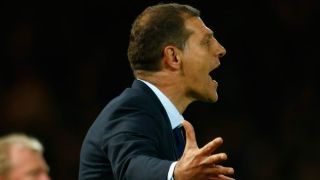 Slaven Bilic said Newcastle "had enough time" to prepare despite their traffic issues prior to Monday's Premier League fixture.

Newcastle manager Steve McClaren felt the fixture could have been pushed back from its scheduled 20:00 local time (19:00 GMT) kick-off to accommodate the visitors - who only snuck in a 10-minute pre-match warm-up.

Bilic's men then eased to a 2-0 win courtesy of Dimitri Payet's brace to move fifth in the standings on nine points, but the Croatian manager refuted the notion his side were more aggressive early to capitalise on any lethargy from McClaren's men.

"They were late, and we were expecting the game to be put back for 15 minutes," Bilic told a news conference.

"I mean, we said [that], but we would have even said that if they had [stayed] a night at Upton Park last night. It would be the same plan."

Bilic confirmed centre-back Angelo Ogbonna had incurred a hamstring injury, but said it could be on the minor side.

"He pulled his hamstring. But I spoke to him, but it looks like it's not a big one. Hopefully, one week."

Forward Andy Carroll appeared for the first time in seven months after knee surgery, and Bilic said it was a key performance for the 26-year-old - up against his boyhood club.