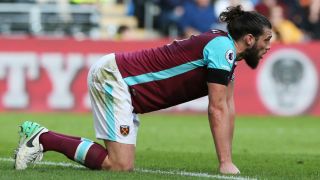 Slaven Bilic has promised to keep faith with Andy Carroll, whose injury woes continue to undermine his career at West Ham.

The striker has featured in only half of the Hammers' Premier League games this season, with a litany of fitness problems disrupting another campaign.

A groin issue means he will miss the visit of former club Liverpool to London Stadium on Sunday, but Bilic is staying patient with a man who has made no more than 15 league starts in any of the last four seasons.

"Andy Carroll won't be able to play against Liverpool. He's still feeling his groin. It's nothing major but he will miss the game," Bilic said.

"It is not a subject for now, but Andy is kind of a player that has such a big impact on our game that we won't give up on him.

"Especially now, as this has nothing to do with lifestyle or not being committed enough.

"He works really hard, it was bad luck and, as I said, I will never give up on him.

"On the other hand, it is no good having a player whose name you put down first, second or third and can't rely on him."

Bilic also confirmed midfielders Mark Noble (hernia) and Cheikhou Kouyate (wrist) require surgery and will miss each of the last two games, with the Hammers finishing their campaign at Burnley.