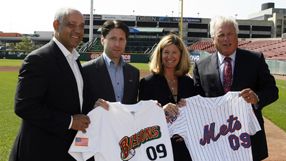 The amateur club, which plays to crowds of about 100 people in the north east, is in the ninth tier of England's football pyramid - a world away from the glitzy millionaire lifestyle of the country's top teams and players.

The 69-year-old chairman of Rich Products Corporation, a food manufacturing and catering company, has not followed the path taken by the Glazer family, John W Henry or Randy Lerner, but has instead put some of his fortune into a team that barely makes local headlines.

Speaking to Reuters from his corporate headquarters in Buffalo, New York, Rich (pictured right) explained: "I have traced the roots of my family back to the area and became aware of the club as a result.

"We manage three Minor League baseball teams and there were big similarities between how we developed them and how we could develop Bedlington. It is a fantastic place with fantastic people and I felt a real affinity with them.

"I decided to help the club because of the passion of the people involved in it but have no equity in it.

"I know the Glazer family at Manchester United, Randy Lerner at Aston Villa and John Henry at Liverpool, but investing in a Premier League club was not for me.

"I got involved because I thought I could help. They were the most under-financed and under-capitalised team in the league but, if you excuse the pun, I hope the Terriers won't remain as the underdogs for too much longer."

Rich's immediate input has been to sponsor the club's strip, ship over an electronic scoreboard from the U.S. and help with international marketing - a fanciful notion for a Northern League side.

"We can do that for them, and hopefully they will start to be competitive and move up the leagues. I went to a match there this year and felt a real kinship with the club."

Club secretary David Collop told Sky Sports News: "It's true to say our chairman thought it was a wind-up when the first phone call came through.

"When we were told about it I was over the moon, but very sceptical at the same time. But this is real and he wants to help us achieve the chairman's targets which are to get the club up."

Rich, who is ranked by the Forbes Rich List as the 488th wealthiest man in the world, added:

"Sport can be about local people, local pride and having a lot of fun. For all the Manchester Uniteds, San Francisco 49ers, and Texas Rangers at the top, there are hundreds of minor teams struggling along. Keeping them going is a tremendous challenge."