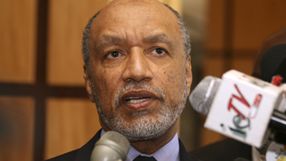 The Court of Arbitration for Sport (CAS) completed its two day hearing of Bin Hammam's appeal on Thursday and secretary general Matthieu Reeb said a verdict was expected by the end of June.

Qatari Bin Hammam, ex-president of the Asian Football Confederation (AFC) and former member of FIFA's executive committee, was not present.

"I cannot comment on what happened during these two days, I can just say that 10 witnesses have been heard, that the parties had ample time to present their closing submissions and now the ball is in our field," Reeb told reporters.

"It's for the panel of arbitrators to start their deliberations and to render a final decision, which is expected at the end of June this year."

Bin Hammam's lawyer Eugene Gulland said in a statement that the Qatari maintained his innocence.

"The hearing... that we just completed today is Mr Bin Hammam's first chance to answer charges against him in front of a court that is not under the control of FIFA," said the statement.

"Mr Bin Hammam has always insisted on his innocence, he has always rejected the charges of vote buying and bribery that FIFA brought against him.

"Mr Bin Hammam has presented a strong case and he looks forward with great hope that the court will find, as I expect it will, and should, that FIFA has not proved the charges against him."

He withdrew his candidacy, and was then provisionally suspended, days before the June election over allegations that he had tried to buy the votes of Caribbean officials by handing them $40,000 each in brown envelopes.

Blatter was subsequently re-elected unopposed for a fourth term as FIFA president, while Bin Hammam was found guilty of breaking seven articles of FIFA's ethics code, including one on bribery.

He was banned for life and subsequently lost an appeal at FIFA.