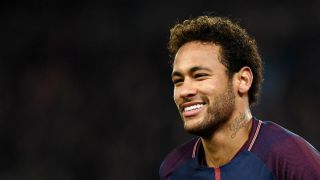 Neymar will be rested by Paris Saint-Germain for their Coupe de France tie against Sochuax after he was left out of the squad by coach Unai Emery.

The Brazilian superstar celebrated his 26th birthday in Paris on Sunday and has been granted time off, with PSG travelling to the Ligue 2 side on Tuesday.

Thiago Motta returns to the squad after a month out with a calf injury, while January signing Lassana Diarra is also included by Emery.

PSG will be without midfielder Giovani Lo Celso due to suspension, while Adrien Rabiot is out with a hip injury, but Kylian Mbappe is included in the squad after serving a ban following a red card for a bad foul against Rennes in PSG's Coupe de la Ligue semi-final victory last month.

Emery and PSG players were among those to attend Neymar's party at the Pavillon Cambon in the heart of the French capital, but the Spanish coach did not get involved with the festivities for too long.

"I was one of the first to leave around midnight. Neymar cut the cake and I left," Emery told reporters on Monday.

"It's good for the [players'] collective spirit. Today, they are all ready with the idea and the mentality to prepare for the match tomorrow."