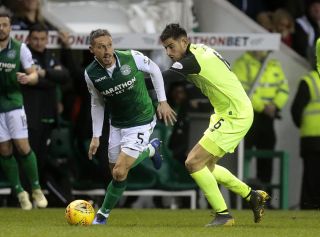 Celtic midfielder Nir Bitton revealed his near year-long frustration of watching from the sidelines as he recovered from a knee injury.

The 27-year-old Israel international played in a 1-0 defeat to Kilmarnock at Rugby Park on February 3 last year, and did not return until January 19 this year in a 3-0 win over Aidrieonians.

During his absence, Celtic completed the domestic double treble last summer and retained the Betfred Cup in December.

The Ladbrokes Premiership leaders are on course for another treble as they prepare to host Aberdeen on Saturday.

Bitton, who signed form Ashdod in 2013 when interim boss Neil Lennon was in charge for the first time at Parkhead, is glad to be contributing again.

“This was the worst part of my injury, to see the boys winning trophies and celebrating and I wanted to be back,” he said.

“As an athlete – footballer, basketball player, it doesn’t matter what you are – you always want to be part of the team, the dressing room, the pitch, just around the team.

“When you are injured for a long time obviously you miss it and you want to be back on the pitch.”