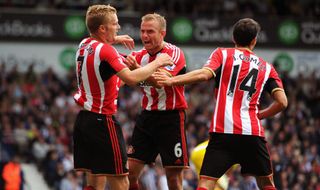 The 29-year-old scored just one Premier League goal in each of the last two seasons and matched that haul by turning home Patrick van Aanholt's cross in the closing stages to earn a draw at The Hawthorns.

Larsson was delighted to get off the mark early in the campaign, but now wants to find the net on a more regular basis to boost Sunderland's top-flight prospects.

"It was nice and it is obviously pleasing personally to get on the scoresheet early on in the season, it is what you want to do and now I want to get a few more than last season," the Swede told the club's official website.

"My goal is probably one of those where you should finish with your left, but I managed to open up my right foot and slot it in."

Before Saturday's draw, Sunderland had lost on their previous five visits to The Hawthorns.

Larsson believes the team displayed enough quality to show they can be a side to contend with this season, particularly in the second half.

"[The Hawthorns] is a place where we have struggled for a long time, but now we are up and running and there were signs in the second half that we are not a bad team," he added.

"We showed a bit of character and fight to get back into it."