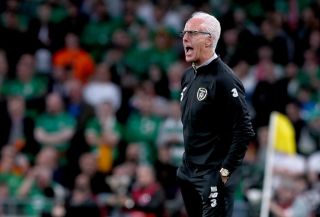 Republic of Ireland manager Mick McCarthy has added Blackburn defenders Darragh Lenihan and Greg Cunningham to his squad as he deals with something of a defensive crisis for the upcoming Euro 2020 qualifiers against Georgia and Switzerland.

Richard Keogh faces up to 15 months out with knee ligament damage, suffered in a car crash that led to the arrest of his Derby team-mates Tom Lawrence and Mason Bennett, adding to McCarthy’s already considerable headaches.

Brighton’s Shane Duffy is also out injured while Enda Stevens is suspended for the Group D match against Georgia in Tbilisi on October 12, meaning McCarthy has only Everton right-back Seamus Coleman available from the back four that has started all five of the Republic’s qualifiers so far.

John Egan and Kevin Long are expected to deputise for Duffy and Keogh in central defence but the 25-year-old Lenihan – already capped twice by the Republic – adds to McCarthy’s options, while Cunningham will challenge Wolves’ Matt Doherty for the left-back spot.

“Terry Connor has been to watch Darragh and Greg play for Blackburn and they have shown him they will be good additions for this squad,” McCarthy said on the FAI website.

“Enda Stevens is suspended for the game in Tbilisi against Georgia and Greg is one of the most experienced left-backs available to us. He was with us in the summer and he knows what we want.

“We’ve watched Darragh a number of times and Terry and the other scouts like his footballing ability. He has been in and around the squad before so I look forward to working with him.”

Lenihan got the call ahead of Ciaran Clark, who has played only once for Newcastle this season.

Stevens is in the squad and will be available for the match against Switzerland in Geneva on October 15.

Luton striker James Collins keeps his place after scoring on his debut last month, but Sheffield United’s David McGoldrick misses out with a groin injury as Preston’s Sean Maguire returns.

Jack Byrne, Josh Cullen, Mark Travers and Kieran O’Hara all keep their places in the squad after making their debuts last month, and McCarthy said he was grateful to have new options available given the number of players out.

“We have injuries and suspensions and I know that better than anyone. But there’s nothing I can do about them. It happens in football,” he said.

“That’s why we changed almost the entire team for the Bulgaria game last month and look how well the players who came in like Josh, Alan Browne, John Egan and Kevin Long did.

“They put their hands up for selection and gave me something to think about.

MMcC: I'm delighted to see James McCarthy make the move. He will need to get into the first team though at Crystal Palace#COYBIGpic.twitter.com/fS9CIe3bUv— FAIreland ⚽️🇮🇪 (@FAIreland) August 16, 2019

“Now it’s time to think about them for Georgia and I look forward to getting back on the training ground on Monday and starting the countdown to these two massive games in earnest.”

There is still no place for midfielder James McCarthy, who has made six appearances for Crystal Palace this season after overcoming a series of injuries which have meant he has not played for the Republic since 2016.