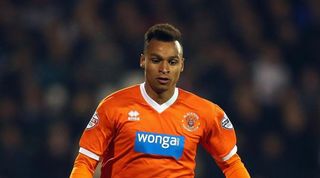 The 19-year-old winger sent an image on the popular social media application Snapchat that showed a picture of Murphy's face with the caption: "We are going to lose...Again".

Blackpool subsequently launched an internal investigation and Murphy later issued an apology for his actions.

However, the Championship club have decided to cancel the player's loan from Norwich City, which was due to run until February 2.

"Jacob is a talented player with a bright future ahead of him and his recent actions should not detract from that," manager Lee Clark told Blackpool's official website.

"However, he realises that he made an error of judgement and understands why we have come to this decision.

"The players and the team need to be fully focused on our fight to stay in the Championship."

Murphy scored two goals in nine appearances for Blackpool, who are rooted to the bottom of England's second tier with just 14 points from 24 matches.