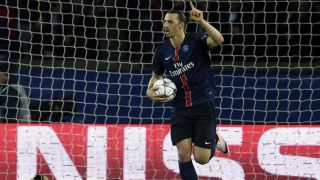 Paris Saint-Germain coach Laurent Blanc says "things are moving" regarding Zlatan Ibrahimovic's future amid reports he is poised to sign an extension with the club.

Ibrahimovic, whose contract at the Parc des Princes expires at the end of the season, has previously said he does not expect to remain with PSG next campaign.

The Sweden striker has been heavily linked with a move to the Premier League, with West Ham, Arsenal and Manchester United among those credited with an interest in his services.

But rumours have suggested Ibrahimovic is set to extend his stay in south-west Paris and Blanc - in his pre-match media conference ahead of Saturday's Ligue 1 meeting with Guingamp - hinted progress has been made.

"Things are moving but now is not the time to talk about it. You will know more in a few weeks," said Blanc.

PSG were left disappointed in their Champions League quarter-final first leg at home to Manchester City, which ended in a 2-2 draw.

Blanc's men now visit the Etihad Stadium in the return leg next Tuesday and the former France coach is poised to reshuffle his team as PSG attempt to avoid a fourth-straight quarter-final exit in the Champions League.

"There will be some new faces but we will have a competitive team Guingamp," he added.

"We all agreed that we had an average game [against City], with a lot of errors. But even so, we should have won this game.

"We should have won the first leg. We will win the rematch. I think it's my job to believe."