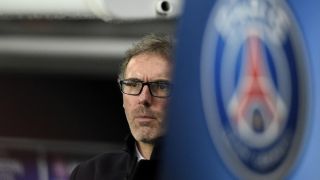 Laurent Blanc is hopeful he will be able to sign a new contract to keep him on as Paris Saint-Germain coach as early as next month.

The 50-year-old took over at PSG in 2013 after Carlo Ancelotti left the club for Real Madrid.

Blanc is in the final months of a three-year deal but is keen to stay on at the club he has won eight trophies with.

"I hope I can sign a new contract before the Chelsea game [on February 16]," Blanc said after his side beat Toulouse 2-1 in the Coupe de France on Tuesday.

"My agent will meet the club soon and they will have to find an agreement.

PSG are unbeaten in Ligue 1 this season and hold a 21-point advantage over second place Monaco.