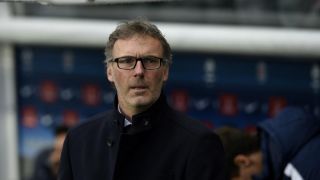 The champions were held to a scoreless draw by Angers in the first half of the season, but a repeat of that result was out of the question at the Parc des Princes as Lucas, Gregory van der Wiel and Angel Di Maria's double added to Ibrahimovic's opener, with Pierrick Capelle pulling one back for the visitors.

However, Blanc believes PSG could have had some difficulties had it not been for Ibrahimovic's strike after 32 minutes of play.

"We put in a great performance in the second half. It was a pleasure to watch," Blanc said.

"The first half was quite complicated, though. Angers were well organised. They already kept us to a 0-0 draw in the reverse fixture.

"Our first goal was fundamental. Things got easier after the 1-0, but the team always remained focused. We were rewarded with some great goals and enjoyed ourselves out there.

"I wouldn't say this was a response to that scoreless draw in the first half of the season. They deserved the draw back then."

Blanc gave Lucas the nod ahead of Edinson Cavani and the Brazilian proved his coach right with a sublime performance.

"A lot of things have changed for Lucas since the first game against Angers," the PSG coach added.

"He got the chance to show me what he can do and he more than satisfied me. He understands certain things on the pitch that are vital to us. He is going to bring us a lot of joy if he continues to develop like this. He has become much more efficient.

"Lucas' starting berth was not necessarily a signal to Cavani. There is stiff competition for places, but that's the case in all areas.

"Edi is struggling a bit at the moment for various reasons, but Lucas has made a lot of progress."