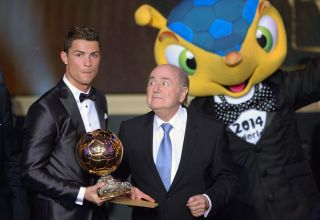 The ongoing saga of whether Qatar will retain hosting rights for the 2022 World Cup, and whether the tournament will be held in the northern hemisphere summer or winter, made headlines again early this month thanks to comments by FIFA secretary-general Jerome Valcke.

Valcke claimed FIFA were already working on moving the tournament from its customary months of June-July to avoid the Middle Eastern summer, which earned the ire of UEFA president Michel Platini.

But Blatter played down the spat, while revealing a sense of bemusement at the media's overriding interest in Qatar stories.

"It is interesting that the … media go on Qatar with only eight years to go and we have the World Cup now in 2014 and it would be more interesting to talk now about the World Cup (in Brazil) in 2014," Blatter said at the Ballon d'Or gala in Zurich on Monday.

Platini was furious that Valcke had publicly discussed his views on Qatar 2022, arguing the FIFA executive committee had agreed in October to leave any decisions or public comments until after the World Cup finals in Brazil.

Blatter, however, seemed unconcerned, adding Valcke had not said anything new.

"It is now two years ago that (Michel) Platini already said we shall play in winter," the 77-year-old said.

"One year and a half ago I said we shall analyse the situation and, if it is possible, to go and play in winter.

"Now we have analysed the situation, what he (Valcke) has said is not new.

"Perhaps it was not interpreted the right way but we are making all the consultations and they will be finished at the end of 2014 so in 2015 we can make a decision if yes or not we will play in summer or in winter."

After claiming last year that he wanted Lionel Messi to win the Ballon d'Or again ahead of Cristiano Ronaldo, Blatter confirmed he had made up with the Portuguese forward, who lifted the prized trophy on Monday.

Ronaldo was not impressed by the comments, claiming the FIFA president had disrespected him, but after being named the player of the year in Zurich, the Real Madrid striker said he had spoken to Blatter and moved on.

"We have had a conversation at the beginning of the year," Blatter said.

"I wished him a good new year and he said it is past what has been."