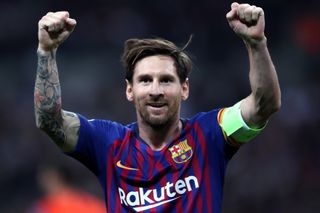 Lionel Messi has honoured the achievements of a blind 10-year-old British footballer by selecting him in a ‘dream team’ which acknowledges the challenges experienced by those living with visual impairment.

Barcelona star Messi has become an ambassador to support the blind and visually impaired, with Mikey Poulli among 12 youngsters from across the world singled out for their courage in the face of adversity.

Arsenal fan Mikey completely lost his sight after being diagnosed with the incurable eye disease Rod Cone Dystrophy following a routine test at the age of six.

Despite that setback, the schoolboy from Oakwood in north London has resolutely continued to play the game he loves and now trains with England’s visually impaired team.

Mikey’s dad, John, said: “He always carried on playing football but from losing his vision to being scouted to play for England was like we were on a rollercoaster ride. It was a bit of a whirlwind.”

Mikey is the only person from the United Kingdom selected by Messi, joining fellow visually impaired youngsters from Uruguay, Brazil, Spain, Germany, the United States, Israel, Japan and France who have similarly inspiring stories.

He has so far been unable to meet the 33-year-old Argentina international due to the coronavirus pandemic and travel restrictions but could do so in the coming months.

“It (football) means everything because I love it and I play it all the time and I watch it,” Mikey said.

“If I was to meet Messi, I would tell (ask) him if he could play for Arsenal for a day because that would be very helpful.”

In recognition of his achievement and to give him greater independence, Mikey has received an OrCam MyEye. The artificial vision device allows the visually impaired to understand text and identify objects and people through audio feedback.

Messi, an ambassador for Israel-based company OrCam, said: “Witnessing each of the members of the ‘dream team’ trying out the OrCam MyEye features, it was clear that this would be a life-changing device for each of them. I am proud to truly make a difference for so many.”