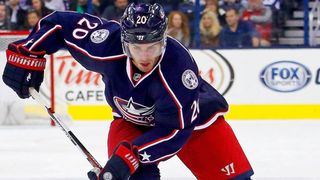 Goaltender Anton Forsberg starred in a shoot-out as the lowly Columbus Blue Jackets stunned the high-flying Washington Capitals 5-4 in the NHL on Saturday.

The Capitals top the Eastern conference, but were powerless to overcome the determined Blue Jackets, who prevailed thanks to Forsberg.

Blue Jackets pair Brendon Saad and Jack Johnson had earlier completed their respective two-goal hauls in the third period to force an additional period in Columbus.

The in-form Florida Panthers put on a clinic, shutting out the New York Rangers 3-0 for an eighth consecutive win.

Logan Shaw, Vincent Trocheck and Brandon Pirri were on target, while Roberto Luongo made 40 saves for the Panthers, who extended the contract of coach Gerard Gallant earlier on Saturday.

The Los Angeles Kings extended their own winning streak, making it five from five with a tight 2-1 victory over the Philadelphia Flyers.

John Moore scored in overtime as the New Jersey Devils edged the Dallas Stars 3-2, the Nashville Predators also required an additional period to beat the Carolina Hurricanes 2-1 and the Pittsburgh Penguins dismantled the New York Islanders 5-2.

The Toronto Maple Leafs saw off the St Louis Blues 4-1, the Minnesota Wild went down in a shoot-out against the Tampa Bay Lightning 3-2 and the Arizona Cardinals suffered a similar fate, losing 4-3 to the Edmonton Oilers in a shoot-out of their own.

The Detroit Red Wings survived a strong comeback from the Buffalo Sabres to pick up a 19th win of the season in a 4-3 triumph, while the Calgary Flames bested the Colorado Avalanche 4-0 and the Winnipeg Jets defeated the San Jose Sharks 4-1.