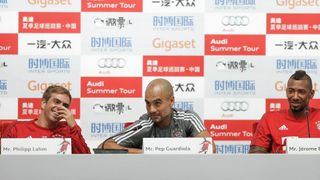 The Bundesliga champions announced last month that Guardiola is leaving at the end of the season, with Carlo Ancelotti his replacement.

Guardiola confirmed on Tuesday that he wants to manage in the Premier League, and Boateng is determined to give the Spaniard the best possible leaving present - just as Bayern did when winning the treble before Jupp Heynckes' departure in 2013.

"He wants a new challenge in England, that's the way it is," Boateng was quoted as saying by TZ.

"We will try to win all the titles we can win. It will not be easy, but we will all go for it. Guardiola's exit will not affect the team.

"The way we dealt with Jupp Heynckes' exit was the right example. We knew he would leave at the end of the season as well. Everybody should act like a professional just like we did then."

Captain Philipp Lahm, meanwhile, was not surprised by Guardiola's decision to move on and is equally determined to ensure his reign ends on a high.

"I knew what he was thinking and knew the reasons behind his decision," Lahm added.

"It is not like his exit serves as extra motivation. We always want to achieve the maximum."