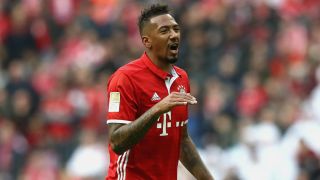 Jerome Boateng has stressed he has no intention of leaving Bayern Munich any time soon.

The Germany international endured a difficult 2016-17 campaign in which he made just 13 Bundesliga appearances, partially due to ongoing injury problems.

Recent reports suggested Boateng could be looking to move on following his disappointing season, but the 28-year-old has laughed off suggestions he is on his way out of the Allianz Arena.

"My only plan is to stay at Bayern," Boateng told Sport Bild.

"There are very few clubs in the world that have the same reputation and tradition that Bayern have.

"I did not play as much as I would have liked to, so it is only normal that I am not entirely happy. But I will now use our time off to make sure I am 100 per cent fit again for next season."

Boateng has a contract with Bayern until June 2021.