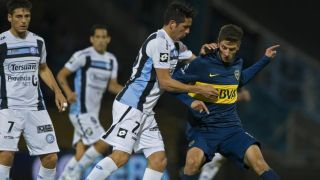 Bentancur was reported to be on the brink of a 10 million euro ($11 million) move to the Santiago Bernabeu, with Madrid thought to be hoping to secure his signature ahead of an impending two-window ban on registering new players.

However, Angelici revealed he has received no official offer for the 18-year-old Uruguayan and ruled out a move with the Argentinian Primera Division scheduled to begin next month.

"Bentancur is not going to go in this window. We have not had any offers for him," Angelici told Radio La Red. "He is at Boca, he is a Boca player and is going to remain at Boca and will play for Boca.

"If someday a proposal arrives for him we will analyse it. Up to today no offers have come and Boca begin [the season] in February, so we will not discuss any proposal now.

"He will play for Boca for at least this year."