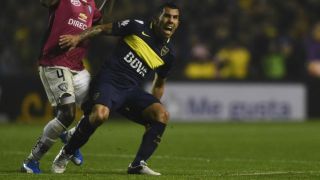 Boca Juniors vice-president Royco Ferrari insists Carlos Tevez will remain with the club and maintains no offers are on the table for ex-Argentina star.

Tevez's future has been the subject of mounting speculation following Boca's Copa Libertadores semi-final defeat to Ecuadorian side Independiente del Valle on Friday.

His former club Corinthians rejected claims attributed to Tevez's agent Kia Joorabchian that the forward was set to return to the Brazilian giants, having turned down offers from previous employers Juventus, Atletico Madrid and two unnamed Premier League teams.

David Gold, the co-chairman at West Ham – another of the 32-year-old's old stomping grounds – earlier this month claimed that Tevez had demanded £250,000 per week to move back to east London.

For his part Ferrari is baffled by the rumours swirling around Boca's prized asset.

"He will continue at Boca," Ferrari told Radio Guemes 1050 AM.

"There are no offers or anything. We are amazed by the rumours."

Meanwhile, Ferrari sought to play down the damaging impact of Boca's defeat to Independiente del Valle after the six-time champions became the latest victims of the surprise package in this season's Copa Libertadores.

"Boca was the only Argentine team in the Copa. Now we must work to win and qualify again to the Copa Libertadores.

"Boca is Boca and always has to be a protagonist."