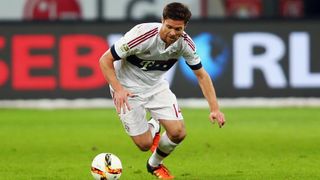 Xabi Alonso says Bayern Munich must be at their very best during an "intense" month ahead, starting with a DFB-Pokal quarter-final at Bochum on Wednesday.

The Bundesliga champions have set their sights on winning the treble in their last season under Pep Guardiola and are only three wins away from cup glory.

Bayern won the Pokal in 2013-14, but lost on penalties to Borussia Dortmund in the semi-finals last season.

Xabi Alonso is determined to do better this time around as Bayern chase their 18th triumph in the knockout competition, the Spaniard urging his team-mates to rediscover their sublime form from before the winter break.

"A very intense month awaits. We have a major game coming up against Bochum in the DFB Pokal, then some tough games against Augsburg, Wolfsburg and Borussia Dortmund in the Bundesliga and the Champions League tie with Juventus is around the corner as well," he told TZ.

"The important, decisive stages of the season are starting now and we have to be at our very best.

"I'd say that we are still developing. We still have room for improvement.

"We want to reach the level we had back in October and November again. We put in some very good performances back then. We have to keep improving if we want to achieve the same level once more."

Guardiola is still without Jerome Boateng (adductor/groin), Javi Martinez (knee) and Serdar Tasci (concussion), while Mario Gotze, Franck Ribery and Medhi Benatia are back in training but unlikely to feature due to a lack of match sharpness.

Bayern are on a seven-game unbeaten run in all competitions, but had to settle for a scoreless draw against Bayer Leverkusen on Saturday as they dropped points for only the third time this Bundesliga campaign.

Bochum, meanwhile, have been in fine form in the 2. Bundesliga in recent months as well, not losing a single game since their defeat at the hands of Eintrach Braunschweig in late November.

Gertjan Verbeek's men beat Freiburg 2-0 on Friday as they climbed to fifth place in the second tier.

The last competitive meeting between Bayern and Bochum saw the Bavarian giants win 2-1 in the third round of the 2011-12 Pokal.