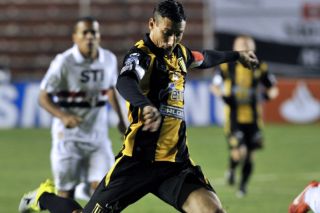 Gustavo Pinedo struck twice in the first half as Universitario jumped out to a 3-0 lead at the break and although Pablo Escobar scored a brace for The Strongest after half-time, the home side held on to win.

While Bolivar were held to a scoreless draw by Sport Boys, they moved two points clear of the The Strongest (22 points), who failed to win for the third time in four matches.

In Sucre, Universitario took the lead after 22 minutes through Pinedo and doubled it 11 minutes later when Ruben Cuesta found the back of the net.

Pinedo made it 3-0 in the 42nd minute but The Strongest pulled a goal back 13 minutes after the break through Escobar.

Mauricio Saucedo then scored on the hour-mark for the home side and while Escobar managed another goal in the 85th minute, it was not enough for the visitors to reel in Universitario.

The Strongest's loss also allowed third-placed San Jose to move within a point of the second team in the LFPB after a 2-1 win over Blooming.

Paul Burton and Carlos Saucedo scored in the opening 17 minutes for San Jose, who had to hold on in the second half after Joselito Vaca struck for Blooming in the 48th minute.