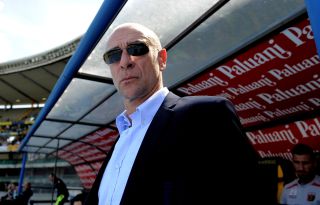 Ballardini comes in less than 24 hours after Pioli was relieved of his duties at the Serie A strugglers.

Bologna are only one point above Serie A's relegation zone having collected a mere three wins from 18 games, with Pioli's final match in charge ending in a 2-0 defeat against bottom club Catania on Monday.

And the Emilia-Romagna outfit have now turned to Ballardini - sacked from his second spell at Genoa at the end of last season - to try and steer them away from danger.

A statement on the club's official website read: "Bologna FC 1909 announces that it has entrusted the technical guidance of the first team to Davide Ballardini, who has signed a contract until 30 June 2014."

Ballardini has much experience in Italian football management and has had three spells in charge of Cagliari, as well as time at the helm of Pescara, Palermo and Lazio in addition to his stints with Genoa.

The 50-year-old's first game in the Bologna dugout will come on Saturday against Lazio, who Ballardini led to glory in the Supercoppa Italiana in 2009.