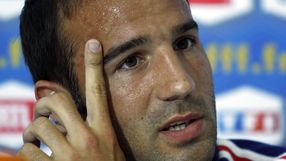 Girondins Bordeaux, who play Nancy on Saturday, will be without injured defender Marc Planus for up to six weeks while he recovers from a serious knee injury.

"It is serious," coach Jean Tigana told reporters ahead of Saturday's match.

"First he picked up an injury on his right knee with France, now it is the left knee."

Bordeaux will also be without captain Alou Diarra who is still suspended after shoving a referee. "We miss him," striker Yoan Gouffran told reporters. "He is a respected leader on and off the pitch."

Gouffran also expressed his frustration at his team's disappointing results after four wins, four draws and four defeats in their 12 matches so far has left them 10th in the table, albeit just five points behind surprise leaders Brest.

"We do not have a warrior mentality like we used to have two years ago. Teams where afraid of us then, that is over. A bit of pride, that is what is missing", he said.

"In a team, you need a conductor and good musicians. You cannot have three or four conductors, otherwise it becomes a mess... (Lucho) is very important because he makes his teammates play. He is a great professional and all the players have a lot of respect for him", Deschamps told reporters.

Marseille will be without midfielder Benoit Cheyrou who has picked up a thigh injury and will be out for two weeks but they welcome back defender Gabriel Heinze and midfielder Edouard Cisse.

Olympique Lyon's match against Nice on Sunday will feel special for goalkeeper Hugo Lloris who faces his previous club. "It is always peculiar for me to play against that team", he told Lyon's website.

"Overall we must obviously play better," he added.

"We used to be able to win even when we were playing badly. We can't be content with our start to the season."

Lyon are 11th but still in the title race just five points off the pace.

"It is too early to give up, defender Cris told reporters. The competition has a long way to go. Obviously, we need to react and we will. Our team can still win the title."

Attacker Lisandro is still sidelined with a calf injury.

After a sparkling start to their season, "Les Verts" have slipped to sixth with 18 points, three points behind leaders Brest.

"I hear people talk about a crisis, no... We have to stay calm, analyse the reasons, find remedies, keep working and stay on course", Galtier told the club's website.