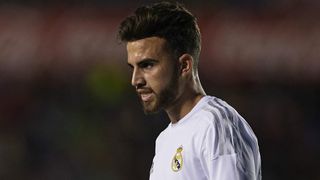 Rising Spain star Borja Mayoral has confirmed he is set to join Wolfsburg from Real Madrid.

Wolfsburg's sporting director, Klaus Allofs, stated earlier this week that they were on the brink of securing a deal for the highly-rated 19-year-old.

The forward, who left Madrid's pre-season training camp in Montreal in order to finalise a deal, has announced he has agreed to move to Germany but stressed his eagerness to return to the Santiago Bernabeu in future.

"I'm going to acquire experience and to do the best that I can in order to return," he told Real Madrid TV.

"I've played at the best club in the world, something few players can do. I'm grateful to my team-mates, coaches, physios and everyone who has helped me every day.

"I've had nine unforgettable seasons at Real Madrid. Now I have many feelings, but if I had to sum up, I'd give my heartfelt thanks for everything I've been given and for the help during this time.

"I'm going to try to do my best to come back.

"Wolfsburg are an historic club in Germany and the Bundesliga. I'm very happy and excited by this new stage that I now get to live."

Reports in Germany have suggested that Borja has signed a one-year deal, although details over the transfer have not yet been confirmed.

The Spain Under-21 international, who joined the club's youth system in 2007, made six senior appearances for Madrid last season.