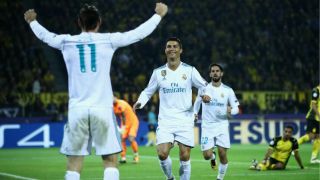 The 32-year-old netted his 410th and 411th efforts for the club in his 150th UEFA club match after Gareth Bale's sensational opener had put Madrid in front in what proved to be a thrilling encounter at Signal Iduna Park.

Madrid came into the match having never won away from home against BVB, but Bale's spectacular volley put them on course for the victory after only 18 minutes.

It was an end-to-end clash that featured chances for either side before Ronaldo celebrated his latest milestone with a composed finish from Bale's cross.

Pierre-Emerick Aubameyang gave Dortmund hope of a recovery but Zinedine Zidane's men made certain of two wins from two in the defence of their trophy as Ronaldo blasted home in the closing stages.

Despite Peter Bosz's call for caution in Monday's pre-game news conference, Dortmund pressed Madrid high up the pitch from the kick-off and twice could have fallen behind from early counter-attacks.

First, Dani Carvajal raced into the box down the right only to shoot straight at Roman Burki, before Lukasz Piszczek just denied Bale a tap-in after Ronaldo had surged clear down the same flank.

Madrid were perhaps fortunate to escape a penalty in the 14th minute, though, with Keylor Navas deflecting the ball onto the raised hand of Sergio Ramos after Maximilian Philipp had turned the ball goalwards.

But with 18 minutes played, Dortmund's wayward defence was punished in sumptuous style by Bale. Carvajal found space 30 yards from goal and clipped a fine pass into the path of the Wales star, who sent a sublime volley into the top-right corner, leaving Burki stranded.

Madrid should have doubled their lead before the break, Ronaldo twice firing wide and captain Ramos missing a free header from six yards out, but it needed a vital interception from Raphael Varane to deny Aubameyang an open goal moments after half-time.

But Dortmund's slack defending was punished in ruthless fashion four minutes after the restart. Toni Kroos split the back four with a fine throughball to Bale, and his low cross from the left was steered home left-footed by Ronaldo from 12 yards out.

BVB were in need of a lifeline and it did not take them long to respond, as Aubameyang prodded past Navas after Varane had failed to reach Gonzalo Castro's cross.

Aubameyang poked another chance inches wide from Mario Gotze's delivery as BVB began to push hard for an equaliser, although they were lucky not to concede a penalty when Bale was brought down by Sokratis Papastathopoulos.

But the more they pushed forward, the more suspect they looked on the break, and Ronaldo sealed the win 11 minutes from time as he raced onto Luka Modric's pass before thumping past Burki at the near post.