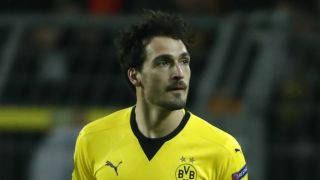 Borussia Dortmund were rocked by the news that Mats Hummels wants to leave the club for rivals Bayern Munich ahead of Saturday's Bundesliga encounter with Wolfsburg.

Dortmund still have a small chance to catch Bayern Munich in the Bundesliga table - trailing the leaders by seven points with three games to go - but the German title will be the last thing on their mind following Hummels' announcement.

Thomas Tuchel's men's will be keen to end the Bundesliga season on a high, though, and prepare in the best way possible for the upcoming DFB-Pokal final against Bayern.

They are unbeaten in the Bundesliga since the 2-1 defeat at the hands of Cologne in December, winning 11 of their 14 matches since.

Pierre-Emerick Aubameyang and Ilkay Gundogan are expected to return to the squad after a spell on the sidelines due to injury, with the duo resuming training on Thursday.

Wolfsburg coach Dieter Hecking, meanwhile, is desperate for his side to show they are not as far behind Dortmund as the Bundesliga table suggests.

Hecking's men impressed in the Champions League as they caused Real Madrid all kinds of problems in the quarter-finals, but they have been unable to replicate that form in the German top flight.

They sit 10th in the table after 31 matches and are already out of the race to qualify for Champions League football, and trail this weekend's opponents by a massive 35 points.

"I expect Dortmund to be as focused as they have been in recent games. We have to do better than against Bremen and Augsburg. That's our only chance to get a good result," the Wolfsburg coach said at a news conference.

"Dortmund are on a good run and will want to keep it up against us. But we always look forward to away games against Dortmund. It is one of the best stadiums in Germany.

"We will meet a very strong opponent who have been enjoying a good season. But we want to show that we are not as far behind them as the table suggests.

"We have to give our all three more times in order to end the season on a high, starting with the match against Wolfsburg. Even if we realise it will be very difficult."

Dortmund beat Wolfsburg 2-1 at the Volkswagen Arena back in December, with Shinji Kagawa netting the winner well into stoppage time.

- Wolfsburg have won just three Bundesliga games in Dortmund (drawing four, losing 11). Their last victory at Signal Iduna Park dates back to December 2012 (3-2).
- Dortmund have won 23 games this term, amassing 74 points in the process – both club records for this stage of a Bundesliga campaign.
- Wolfsburg are on a six-game winless streak in the Bundesliga (drawing two, losing four), the longest such run in the division (same as Stuttgart).
- Thomas Tuchel's side are the only professional side in Germany without a league defeat this calendar year.
- 12 individual mistakes by Wolfsburg players have resulted in goals, a league high. Nine of these errors have taken place since Christmas, including two last weekend against Augsburg.