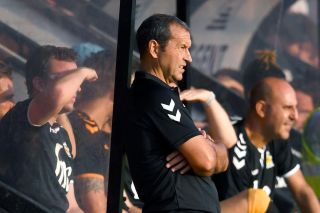 Cambridge have taken only one point from their last six games, sliding down the League Two standings to sit in 18th place, six points above the drop zone.

Former Nottingham Forest and Hibs manager Calderwood had signed a two-year contract extension in September after a good start to the season, but the decline in fortunes has led the club to act.

The club’s director of football Graham Daniels said: “We would like to thank Colin for everything he has done for the club. He came in last Christmas and played a big part in securing our League Two status in what was a difficult season.

“We had all hoped that the club would be able to push on under his leadership but after a reasonable start to the season everyone at the club recognises that both results and performances have not been good enough in recent weeks.

“We had all hoped that this poor run could be turned round but unfortunately that hasn’t happened. We have great respect for Colin Calderwood and wish him well for the future.”