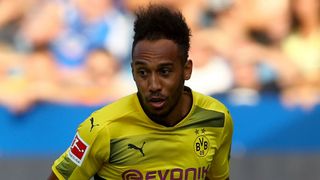 Peter Bosz has labelled talk Pierre-Emerick Aubameyang could leave Borussia Dortmund for the Chinese Super League in January as "nonsense".

Reports have suggested Aubameyang, who has been heavily linked with a move away from Signal Iduna Park, is poised for a €70million switch to Tianjin Quanjian in the new year.

Dortmund have been quick to deny that is the case and head coach Bosz was emphatic in his dismissal of the speculation.

"The advantage is that I'm not reading all the newspapers," Bosz said after Dortmund's 2-2 friendly draw with Bochum on Saturday.

"I've talked to [sporting director] Michael Zorc and he said that nothing is true. That's nonsense."