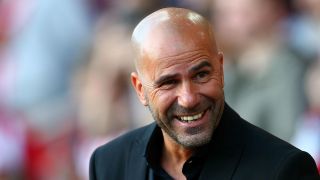 Peter Bosz has left Vitesse in order to take up the vacant coach's position at Maccabi Tel Aviv.

The 52-year-old guided the Dutch side into the Europa League's qualifying rounds but they were unable to progress beyond a tie with Southampton and Bosz leaves them in fifth position in the Eredivisie.

Bosz has agreed an 18-month deal with the Israeli club - who were eliminated from Chelsea's Champions League group this season - following Slavisa Jokanovic's move to Fulham in December.

Maccabi sports director Jordi Cruyff revealed the former Vitesse boss has been a long-term target and was delighted to have him on board.

"I have been following Peter's progress for many years and admired the work he has done, a fact which led us to try and sign him more than once."

Vitesse have announced assistant coach Rob Maas will take control of the first team until a replacement is found.