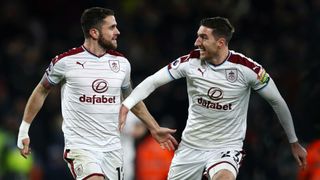 Burnley jumped above Tottenham to sixth in the Premier League as Chris Wood and Robbie Brady helped the Clarets to a deserved 2-1 win at Bournemouth.

Sean Dyche's men only amassed seven away points in the entirety of last season, but have already doubled that tally this term thanks to a second successive win on the road.

It was no more than Burnley – denied a point against Arsenal on Sunday thanks to a last-gasp Alexis Sanchez penalty – deserved for a textbook away display, with the visitors industrious when in possession and typically solid at the back.

Wood's first-half goal was just reward for a hard-working performance that had already seen him hit the crossbar before opening the scoring, albeit thanks to a lucky bounce off Steve Cook.

PIC: wheels away after opening the scoring at November 29, 2017

Brady seemingly made sure of the points just after the hour with a superb hit from 20 yards, but Josh King's goal 11 minutes from time at least kept things interesting.

The Clarets saw it out, though, with a win seeing them climb a place to sixth, and they incredibly sit just three points outside the top four.

Eddie Howe, a former Burnley boss, had seen his team keep three straight clean sheets but saw his team drop a place to 15th on a miserable 40th birthday.

Burnley were first to test the waters with Ben Mee nodding Robbie Brady's corner into the path of Wood, whose looping header hit the top of the crossbar.

The New Zealand international knew little about his next effort. A cross from Phil Bardsley - making his first Burnley league appearance for 4,245 days having enjoyed a loan spell in 2006 - hit him on the head, bounced into the ground and was tipped over by Asmir Begovic with Brady's presence putting his team-mate off.

Shortly after, Wood raced into the penalty area and unselfishly squared for Jeff Hendrick, who was denied only by a brilliant recovery block from Cook.

The pressure eventually told in the 37th minute, though.

Jack Cork picked up Brady's brilliant flick and drove forward before returning the pass to his team-mate, and the winger's cross ricocheted kindly off Cook into the path of Wood, who prodded into an unguarded goal.

Bournemouth tried to muster a response either side of the break, but a lack of quality in the final third coupled with some stoic Burnley defending meant chances were few and far between.

And their hopes of a comeback were hit when Brady's brilliant effort doubled the visitors' lead in the 65th minute.

A lightning counter-attack led to Johann Gudmundsson teeing up Brady, who shifted onto his weaker right foot and lashed an effort into the top-right corner, via a slight deflection off Nathan Ake.

Bournemouth undeservedly found a route back into the match in the closing stages, Callum Wilson cleverly diverting Ryan Fraser's pass into the path of Jermain Defoe with his chest, before the England striker's cross found its way to King, who bundled in from close range.

The home side tried to launch a late assault for an equaliser, but Burnley held firm for the win to continue a stunning first half of the 2017-18 campaign.