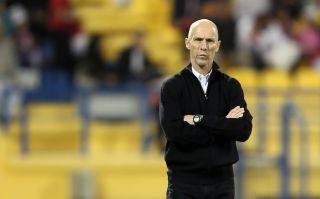 Bradley's men were belted 6-1 by Ghana in the first leg of their play-off on Tuesday and need a huge turnaround to reach Brazil 2014.

The American said he intended to lead his side into the second leg on November 19, but conceded they were unlikely to make the finals.

"Our dream of qualifying for the World Cup has become nearly impossible," Bradley told reporters.

"But we still have a chance in the second leg. I will try to work on the players.

"I apology to the Egyptian people for Tuesday's loss. I know that reaching the World Cup is the dream of all Egyptians but I failed to realise that dream."

Bradley made two substitutions late in the first half with his team going into the break at Baba Yara Stadium 3-1 down.

But they conceded another three goals in the second half in a huge blow to their chances of qualifying for the World Cup for the first time since 1990.

"I tried to make a mix between youth and experienced players, but we committed a lot of mistakes during the game. It was not our day," Bradley said.

"I sought a recovery in the second half but the players' mistakes were numerous."