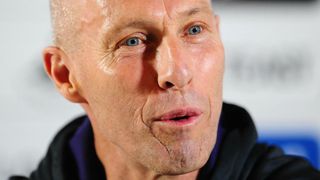 Bob Bradley hopes to kick off his Swansea City career by preserving the club's fine recent record at Emirates Stadium.

Bradley was brought in to replace Francesco Guidolin as manager of the Welsh outfit last week following a difficult run of results for the Italian.

The American's first task will be to take his team to London on Saturday to tackle an Arsenal side who have not beaten Swansea at home in the Premier League since 2011.

Swansea have won three and drawn one of the four Emirates fixtures since suffering a 1-0 defeat in their first season in the top flight.

"I’m very aware of it and the part I love about that is we can go there with confidence," said Bradley.

"We have guys who have won there before, but we have to play well. All the details need to be right.

"Arsenal's football speaks for itself, we know what they're about, so we have to make sure our awareness of what's going on around us, the distance between the lines, is there so they can't take advantage.

"And I'll always go back to the idea of going there to play, to have confidence on the ball. You've got to have the confidence to have people in front of the ball, to create advantages. That will be the football test.

"We can talk about it all week, but it’ll come on the day when we’re on the ball."

And Bradley is relishing the opportunity to pit himself against Arsene Wenger on his Premier League bow.

"I met him once when I was manager of the US and I watched them train and had a chat after," added the former United States coach. "He's very bright and was fun to talk football with.

"[Going up against Wenger] is up there for me. I don't usually look back on those things but I've had the chance to coach against some big names - [Fabio] Capello, [Vicente] del Bosque - but Wenger is right up there with the top managers.

"And to be at a club for 20 years where the football is such a reflection of the man is fantastic. [Pep] Guardiola was speaking about [Johan] Cruyff last week and his influence more than trophies, and if you look at what has happened over 20 years at Arsenal it's the same."