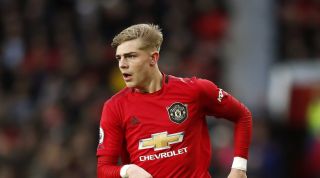 Wes Brown says he has been pleasantly surprised by Brandon Williams' emergence this season.

Williams made his Manchester United debut in the League Cup in September and has since gone on to make nine Premier League appearances.

The 19-year-old left-back has played with a maturity beyond his tender years, and is already a key member of Ole Gunnar Solskjaer's first-team squad.

And Brown, who played 362 games for United, has praised the way Williams has stepped up this season.

“At the start of the season, a lot of attention was on Mason Greenwood as the next young player to come through because everyone in youth football knew about him. His goalscoring record was fantastic at all levels, plus he had a bit of a taste of the first team last season, so there was an expectation that he’d do well this season.

"Brandon, though, has come in and hit his stride from the first game he played. He was straight into it. Not many people knew who he was, but he’s put in fantastic performances every time he’s played.

"It’s like he’s been playing at this level for a long time. I remember speaking to someone at the Under-23s and there were other players who were standing out more, but sometimes that happens. You get a break, you get on the big stage and you perform better because of the demands. You almost fall into the first team and you just push on.

“He gets stuck in and every challenge, he accepts. He doesn’t try to shy away from anything. He won’t back down.

"Some managers, when you come up against a young lad, they’re telling you that he’s only young, only had a few games, try to get at him a little bit. I’m sure that will have happened with Brandon, but he accepts the challenge every time.

“As a defender, it’s always important to win your first couple of challenges in a game. If you do that, then your opponents have to rethink what they’re going to do. If he’s handling every situation they put him in, it becomes difficult for them.

"Before the game the experienced pros will be trying to get at him, but it seems like he likes that. He accepts the challenge and takes it on, which is very important.

“What I like about him is that he doesn’t seem to be fazed. He basically plays his own game. I think Ole has seen what he can do, he knows he gets forward and can do it comfortably, and he’s happy to let Brandon play his own game. It’s very exciting.”