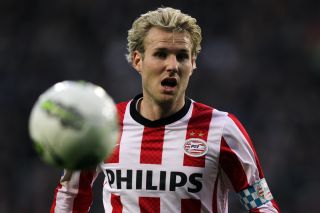 Toivonen was heavily linked with Norwich City during the summer, but a transfer to the Premier League club did not materialise.

The Sweden international's contract at the Philips Stadion expires at the end of the season, although PSV have offered him the chance to extend his deal by another year.

However, Toivonen has previously intimated that it is doubtful he will stay with Phillip Cocu's side.

Still Brands is looking for negotiations to progress, and is not anticipating Toivonen to leave the club for nothing.

"We will hear what he wants next week and in our opinion it can be quickly settled," Brands told Voetbal International.

"Ola does not give me the feeling that he wants to leave on a free transfer."

Toivonen joined PSV from Malmo in 2009 and has since gone on score 77 goals in over 180 appearances for the club.