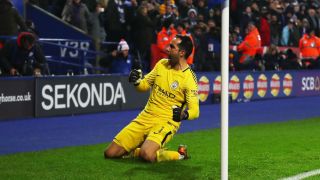 Claudio Bravo is set to start for Manchester City in the EFL Cup final against Arsenal after impressing boss Pep Guardiola with his displays in knockout competitions this season.

Chile goalkeeper Bravo endured a torrid debut campaign in England after joining from Barcelona in August 2016, prompting Guardiola to bring in Ederson from Benfica.

The Brazilian has taken Bravo's place for Premier League and Champions League games, winning rave reviews for his performances.

It has left the 34-year-old restricted to a diet of domestic cup action, although he starred in penalty shootout wins over Wolves and Leicester City in the EFL Cup and Guardiola will seemingly resist any temptation to give Ederson the nod at Wembley next weekend.

Speaking ahead of the FA Cup fifth-round trip to Wigan Athletic, Guardiola said: "Claudio is going to play. We are in the EFL Cup final thanks to him.

"I cannot forget what happened here against Wolves. He saved two rounds of penalties, and the way he played.

"The goalkeeper is a different position to the other team-mates. It all depends on the performances and the quality but in these competitions we are going to play Claudio."

Guardiola insisted Bravo's selection for cup games was not merely to placate him following Ederson's arrival and credited the ex-Real Sociedad man for his professionalism.

"He reacted perfect. I know for the players - not just Claudio, the other ones – when they don't play regularly it is not an easy situation. They are here to play, I understand completely.

"But he was perfect, he trained good as always. That is why, when he has to play, he is ready. He knows football changes situations from one day to another and he knows always he has to be ready like his team-mates."

Struggling to make the grade was something Barcelona great Guardiola experienced towards the end of his decorated playing career.

He undertook an unsuccessful trial with City in 2005, who were then managed by ex-England defender Stuart Pearce, and Monday's opponents Wigan also considered bringing in the holding midfielder.

"They tried to sign me when I was a football player, years ago," he explained before bursting into laughter.

"I was not good enough! That is the truth. I was old, really old as a football player to come to England.

"I knocked on the door and I tried to come here and play in English football but I was not able.

"It was the same as what happened here, when I came to Manchester City with Stuart Pearce. They were so clever."